It has been about three-and-a-half years since I last wrote an "About" page (well, technically, since Gretchen Alice wrote it), so I figured it was time for an update. 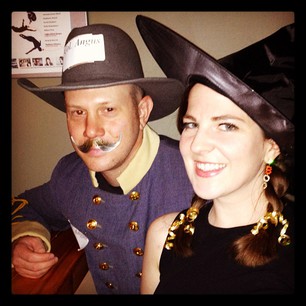 My name is Sandra, not Jane. I originally wanted this blog to be anonymous (hence the "Jane,") but I gave that up and use my real name (Sandra) now. I comment on other blogs as Jane to be confusing out of laziness for consistency. I don't blog (or comment) as much as I used to. Sorry about that. (Or, if you don't like me: you're welcome.)

I'm in my early 30s. I live in Austin, TX with my husband Abe (formerly known as Achilles), my dog Bailey, and our three chickens. I have an adorable niece and nephew, another niece on the way, and the obligatory best friends and family ever.

Abe and I recently bought a house as close to the old neighborhoods in downtown Austin (where we both grew up) as we could afford. We are not very close to downtown Austin.

As far as my interests (particularly what I like to blog about), I like to consider myself a dilettante. For me, the term does not have a negative connotation. Everyone has their passions; my passion just happens to be trying lots and lots of different things (and watching scripted television shows that get canceled or changed due to criminally low ratings). I have tried my hand at stand up comedy, animal husbandry, baking, cooking, learning Italian, triathlons, knitting, playing the ukulele, sewing, cake decorating, gardening, and probably some other things I've forgotten about. I have a three-page (and counting!) list of other hobbies I want to try.

I like to think everyone has a little bit of Leslie Knope inside them; I am the Leslie that puts a lot of thought into gifts. (And possibly also the Leslie Knope that eats waffles a little more often than she should.)

I work as a computer programmer, which I mostly enjoy. Recently, I took a year or so off from computer programming to work from home for a Really Big Company (a "fruity" electronics company that made me sign one heck of a confidentiality agreement when I left). It was a good experience, but working from home turned out to be bad for me as a human being. So now I'm back to programming. I go to work at a Big College Campus, which requires me to do all sorts of exciting things, like change out of pajamas and ride the bus and interact with other humans who are not yelling at me.

A couple of years ago, my husband Abe gave up his lawyer job to become a police officer. I've since come to the conclusion that the only people the general public hates more than lawyers (until they need one) are cops (until they need one). I understand that you may have strong feelings about police. I prefer not to discuss them with you. Honestly, policing is not my first choice for Abe's profession, but he's happy, so I'm happy.* 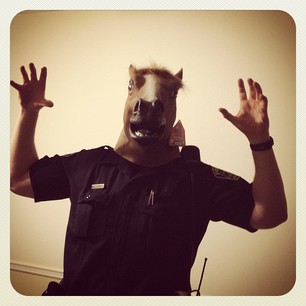 Since it is the question I'm most frequently asked lately: there are currently zero babies in my home or uterus**. Someday, maybe, we'll have a kid that combines Abe's writing skills with my math skills, and everyone better watch out, because, wow, that kid is going to ace his or her SATs. (That, or s/he will inherit my writing skills and Abe's math skills and both of our ADHD and everyone should still watch out, because wow, that kid will be a hot mess.) Or maybe we'll adopt a child, or maybe we won't have kids at all. I promise, I'll let you know if there is any development on that front.

If you have any questions or want to be best blog friends, please do tweet or email me. If you want to contact me for some other reason, you should know that I don't do sponsored posts, and generally speaking, I don't do product giveaways.

Also, I try to be a nice person, but sometimes I am bad at humor/life/social skills. Let me know if I offend you, and at the very least, I'll try to do better next time.

*I never even felt like a "police wife" until a few months ago. One night, a call came out about a possible shoplifter. My husband, a rookie who was expected to take that type of "annoying, routine call," was about to assign when an officer who was closer took the call instead. The officer who took the call was shot and killed in the line of duty. I bring this up to explain why I am not interested in debating police use of force or civil rights here: it's just not something I can be unemotional about.

**But thanks for asking, random coworker I met three minutes ago.

Posted by Jane at 12:36 PM
Email ThisBlogThis!Share to TwitterShare to FacebookShare to Pinterest

I love it. I kind of freak out when I remember that your real name is not Jane. Because that's what it is in my head forever and always.

Loved this! I feel like I know you better :) (and it seems we have a lot in common). You need to update your blog more often missy!!