I paid off my student loans today (WHEE!) so I figured it was a good time to do a quick 30 Before 30 update:

Posted by Jane at 12:53 PM 7 comments:
Email ThisBlogThis!Share to TwitterShare to FacebookShare to Pinterest
Labels: 30 before 30, happy things

Pretty much the best thing I've ever seen ever

Posted by Jane at 8:44 AM 2 comments:
Email ThisBlogThis!Share to TwitterShare to FacebookShare to Pinterest
Labels: dogs, happy things, summer

Out of the grumps

I've been feeling sort of down-in-the-dumps this week. I've been pretty anti-social, more content to sit at home with Netflix (aka my enabler) than to go out with my friends. In the past, this sort of behavior has been the first step on the slippery slope toward Depressionville.

Fortunately, this afternoon my friend Kelly posted a picture of us getting ready for our comedy performances. Looking at the picture I tell that I'm being goofy, but also that deep down, I'm really happy. It was just the kick in the pantaloons that I needed to get myself up and out of the house this weekend. 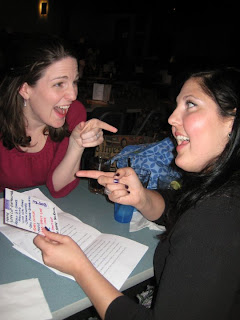 My mind grapes are overripe

I think I pulled a muscle in my brain on vacation. That's totally possible, right?

I have a lot that I want to say (and even more pictures to upload from our wedding and honeymoon), but I can't seem to sit down long enough to do any of it. I should have taken a laptop - or at least a notebook - on vacation. This giant bottleneck of ideas is going to take a while to sort through. Don't worry; I am not planning to go all Alanis and be all, "my vacation changed my liiiiiife, y'all." (It didn't.)

In other news, I went to see a movie* this weekend. I hardly ever go see movies in the theater, but Achilles was going to a different movie that I didn't think I could sit through, and I didn't really feel like 1.) trying to organize last-minute plans with family or friends or 2.) sitting at home alone.

I got to the theater early, because Achilles' movie started about twenty minutes before mine did. The theater was pretty empty, so I grabbed a seat in the middle/left/back(ish).

The only other people there were a teenage couple who spent the entire movie fiddling with their iPhones, a grandmother and her 7-year-old grandson (poor kid), a very chatty couple on (I think) their second or third date, and a middle aged couple.

It was kind of weird, Internets. The middle aged couple in about 30 seconds before the movie started and sat in the seats right to the left of me. Is it just me, or was sitting in the seats right next to me kind of an aggressive move? The same seats were empty in the rows in front and behind us. I don't mind sitting next to someone when the theater is full, but when it's almost empty, it feels weird. I moved to another seat a few spaces down.

What are your thoughts on that? Was I rude? Were they? Am I reading too much into this? Tell me, Internets.

I probably need to go get my brain back in shape now. I hope your week is off to a good start!

*I know, I know. But what can I say - I've liked Amanda Seyfried since she played Lilly Kane on Veronica Mars.
Posted by Jane at 9:01 AM 8 comments:
Email ThisBlogThis!Share to TwitterShare to FacebookShare to Pinterest
Labels: rambling

We got back from Europe on Tuesday evening. The combination of a weird sleep schedule, stress, PMS, and airport food resulted (unsurprisingly for me) in a massive migraine headache after work on Wednesday. Fortunately, waiting for me in a pile of mail was a package from Alex, my swap mate in Her Cozy Swap.

What was in the package, you ask? This adorable eye mask from BibBon:

Do you see the little birds??? How adorable and perfect is this mask? I promptly took headache medicine, put the eye mask on, and passed out. [Random note: while I slept, I had a dream that I went to a blog meetup to meet Kim and some of her blog friends, but got a terrible migraine and had to leave before we even got drinks. Migraine dreams? Almost as bad as dreaming about work.]

I feel much better this morning, and will hopefully have some time before work to upload pictures from Greece. Thanks again to Alex for an AWESOME cozy swap gift.
Posted by Jane at 5:06 AM 4 comments:
Email ThisBlogThis!Share to TwitterShare to FacebookShare to Pinterest
Labels: birds, blogiverse awesomeness

You may have wondered (but probably didn't) why it was so quiet 'round these parts for the past week and a half. Abe and I were in Greece for our honeymoon. I kept it quiet in case a random crazy person who was in desperate need of fine slightly battered IKEA furniture happened to read this blog while we were gone.

At any rate, I missed you all and will be catching up ASAP. However, I think I need to eat dinner* and pass out for a while first.

*My sister had lasagna, salad, fruit salad, bread and dessert prepped and ready for the oven for us when we got home. She knew we'd be sick of eating out and too tired to cook or shop for groceries. It was seriously one of the nicest, most considerate things ever.
Posted by Jane at 6:28 PM 5 comments:
Email ThisBlogThis!Share to TwitterShare to FacebookShare to Pinterest
Labels: loose ends

...that packing well is an art form
...that movies longer than 1.5 hours should have an intermission
...that if I have bad news, and you tell me "everything happens for a reason," I am pretty much allowed to punch you in the nose
...that laziness can be a gift, if you use it to make you more efficient
...that someday I'll learn not to procrastinate so much
...that it's OK to take baths. (Yes, I've heard the "you're sitting in your own filth" argument. I read once that baths actually make you cleaner than showers as long as you don't go all George Castanza with your towel, so I'm sticking to that.)
...that people who still do George W. Bush impersonations need to learn some new material already

What do you believe?
Posted by Jane at 6:42 AM 2 comments:
Email ThisBlogThis!Share to TwitterShare to FacebookShare to Pinterest
Labels: rambling

Thought of the day...

Sometimes I think men really do have it easier than women. I mean, you are never in your life going to have to find a place to store your bobby pins. Most likely.
Posted by Jane at 7:40 AM 4 comments:
Email ThisBlogThis!Share to TwitterShare to FacebookShare to Pinterest
Labels: rambling
Newer Posts Older Posts Home
Subscribe to: Posts (Atom)