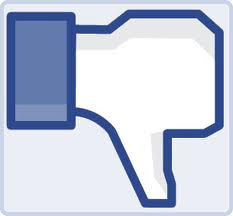 I deleted my Facebook account a few months ago. I told people it had to do with Crazy Poop Lady* and wanting more privacy online, but that was mostly a lie for the following reasons:
No, to be honest, I mostly quit Facebook because I found it annoying. It got to the point where it reminded me of a high school cafeteria (with the addition of cousins, advertisers, and, most recently, grandmothers): everyone talked about the Same Damn Things all the time, and there really weren't a lot of healthy options on the menu for people who just wanted to extend metaphors way too far and mostly be left alone. By the end, I had taken full advantage of the "hide all posts" option and I felt like last Little One in the bed: my News Feed consisted of months-old status updates from my high school art history teacher and a few interesting science-related articles and infographics posted by a guy I hadn't talked talked to in 12 years.
So after the last big round of "Facebook changed it's privacy/filtering options and it is over-sharing/over-informing and I don't know how to fix it" I deleted my account. There was minor drama -- "Sandra deleted me from Facebook?! Can you ask her what I did?" "OMG, she deleted me too!" -- which I ignored, because the people I want to talk to generally know how to use telephones and email and don't overreact to perceived internet slights. Mostly, there was a general "Yeah, that makes sense that you'd do that" consensus.
How is life Facebook-free? Well, it's pretty much the same, except I have a little more free time to waste watching scripted television and I don't get irrationally irritated with friends and acquaintances as often. There are a few websites I can't use because they require me to sign in with a Facebook profile, but honestly, I find that sort of pushy and am more than happy to take my business elsewhere. A few local businesses use Facebook pages instead of real web pages, but Yelp comes in handy for those cases, and I figure eventually those businesses will grow up, realize they aren't a lemonade stand, and set up real websites like the big kids have**.
I don't see myself creating a new Facebook profile any time soon (or ever, at this point). I want to do things because I find them interesting, not because the pictures would make me look cool on a social networking site. I want to be friends with people, not "friend" them.
I guess saying all this may make me sound just as smug and annoying as people who "don't own a television." So I'll qualify with this: I don't think quitting Facebook has done anything to magically improve my quality of life (or will do anything magical for anyone else). It's just that the choice between using something that annoyed me on a daily basis and not using it? Was kind of an easy decision.
/ end rant.
Any questions?
*Seriously. Between Facebook, Google, and Libertarian websites that take the Freedom of Information Act to its creepy extremes, I could write Poop Lady's back story for an episode of Intervention (complete with pictures, work history, and obituaries). The Internets can be a scary place.
**Maybe I am a little bitter about businesses not having real webpages. But graphic designers and webmasters need jobs too! Oh, the economy!
Posted by Jane at 12:23 PM
Email ThisBlogThis!Share to TwitterShare to FacebookShare to Pinterest
Labels: facebook, internets, quitting facebook

I haven't been in on facebook since 2006 - I don't miss it at all really. The only way I think I would get a facebook account is if I needed one for work (oh the irony since one of the reasons I don't want one is that I don't want work places to stalk me!).

Part of me wishes I could do this. Part of me enjoys the connectedness with certain people that I wouldn't otherwise have. I guess I am stuck with it for the time being. But I can see how it would free up a TON of time.