Baby New Year seems like kind of a jerk

I almost always try to cram too many things into my last couple days of vacation. Eye appointments, vet appointments, laundry. The list goes on and on.

Today after an unsuccessful visit to the eye doctor (they changed ownership and no longer take my insurance), I grabbed fast food lunch (the healthy eating will start tomorrow, I guess), and headed home to watch bad television and finish some laundry.

I heard what sounded like a series of loud knocks on the door. Thinking it was an overly-assertive UPS guy, I opened the door.

Smashed eggs and dog poo slid down the door and into the entryway. I saw my neighbor's boyfriend walking across the parking lot away from our door and back to his girlfriend's condo.

Said neighbor's boyfriend has been known to be kind of a jerk. In the past few weeks, his (off-leash) dog has attacked Bailey twice, once while I was getting out of my car and was physically unable to get out from the middle of the dog fight. Abe and I both suggested he walk his dog on a leash to avoid future altercations. He replied that we were "f---ing f----ts." For the next few days, he made a point of creepily watching me as I walked to my car on my way to work.

Still, this latest act seemed really violent and out-of-the-blue. I called the police and the property management company.

The property manager was on the phone with another owner when I called. When she called back, she told me that she'd been on the phone with another owner whose dog had been attacked by the boyfriend's off-leash dog that morning. As a result of the morning's dog attack (as well as several other reports from other residents), the boyfriend and his dog (neither of whom were on the lease) had been evicted a few hours prior.

Of course, when the police officer questioned him about the dog feces and eggs on our door, the boyfriend denied any involvement and said he'd seen "suspicious looking kids wandering around the complex." While the police officer is filing a report (which will help if a pattern of psycho behavior develops), it's really our word against crazy boyfriend's at this point.

To top all this off, when the police officer came by to talk to me, Bailey got so excited that he knocked a glass off the coffee table and broke it. I tried to clean it up too quickly and cut my hand.

Five stitches and a tetanus shot later, I think it's safe to say that this has been kind of a bad day. 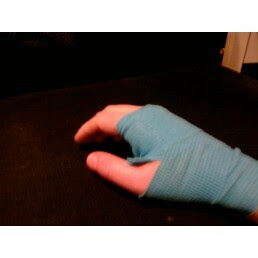 Posted by Jane at 4:45 PM
Email ThisBlogThis!Share to TwitterShare to FacebookShare to Pinterest
Labels: condo woes

WHAT?. Duuuude. Some people are just wacked out. May a sharp, heavy, well timed icicle fall on him.

Diary of Why said...

Your word against his, eh? Gee, I wonder whose word I would go with. Hmm....

And you, my dear, are the queen of understatement. Not a single instance of caps lock angst. I admire your self restraint.

WOW! I can't believe you're so calm about this situation. I would be a ball of anger and tears.

I hope your year turns around...

OHHHHHH my lanta. This is just.... I just... I don't know how you are so sane right now. I'd be sooo livid and crazy I don't know what I'd do!! What a horrible day. You need some box wine and crap TV stat!

what a ridiculous mess! what's wrong with that boyfriend person? like seriously...that's psychotic behavior. and your hand? OUCH.

I'm not even sure how I'd deal with someone like that. His actions are so beyond the realm of anything I would do - I don't know how to handle such ridiculousness. Sounds like you did well. What a jerk.

Wow - what a day indeed.

You're very calm and sedate about the whole thing which I totally admire, I'd be a total mess.

also I am few posts late on this - but I think your 13 by 31 goals are totally achievable and good! I like lists. I think it's a good way to remind ourselves of things we'd like to achieve. Even if we don't get to them all.

I am livid on your behalf. I'm glad you called the police and documented his behaviour. Hopefully they'll move out and you'll never have to see him or his aggressive dog again.