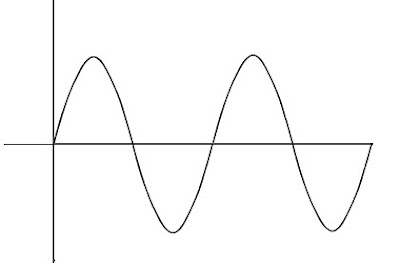 A cycle seems like it would describe a situation that is frustrating, but not hopeless. After all, the cycle has something that kicked it off, so it could (at least in theory) have something that stops it from endlessly repeating itself.

Vicious circle always makes me think of something much more hopeless:

At any rate, I feel like I've been stuck in some type of vicious mathematical pattern lately. I've been eating terribly and not getting enough sleep, which has led me to skip going to the gym. Not going to the gym has led to further feelings of ickiness, which have caused me to be too tired to cook. When I'm too tired to cook, I end up eating too much fast food/restaurant food and drinking too much caffeine, which makes me feel terrible and not get enough sleep.

Lately, some of my favorite Internets talked about the importance (and relative ease) of being healthy, so I decided to break the vicious cycle/circle and do something about my bad patterns. I took Bailey for a jog yesterday, and made my breakfast this morning. (Achilles made my lunch because he's a sweetheart). We'll head to CrossFit tonight.

The only problem I'm having is that I want to feel better *instantly* and suddenly become Superwoman in every area of my life. Hopefully, I can learn to be patient so I don't fall right back into old habits.

Any vicious cycles/circles you're trying to avoid?

Who says it's vicious circle? I've always heard/asid "vicious cycle."
I am in a vicious cycle of sleep patterns. Anti-anxiety pills are wonderful, but very sleep inducing. So if I take one, I'm guarenteed a good night of sleep, but I have to take it by 9:30ish if I don't want to wind up groggy. But if its gets too late and I"m still wide awake, I debate if I should just take one to knock myself out and deal with teh grogginess the next day, or if I should just stay up until 2am, reading the internet and being an unproductive human being.

Either way, I don't get much done at work the next day. And then I feel tired/lazy from doing nothing all day.

I get the wanting to feel better instantly thing SOOOOOOOOOOOOO much. I'm stuck in a vicious cycle (which is what I've always said, too) as well, so i know how you feel.

...i just think about how fast time flies by! but i know i am in a total gym funk too. let us know what works!!

I've been eating a lot healtier lately, and I so hope I can keep it up.

I'm trying to keep my chin up at work, I just keep telling myself I just need to make it through a little more than a month and I'm home free.

Lack of sleep is my demon. I could have the best of intentions to make a healthy meal or do some sort of exercise, but if tired, I'm screwed.

Try setting a bed time for 2 weeks (this is harder than it seems) and things will fall into place.

It's not vicious cycle? Say what? Are you sure? Because circle sounds lame... who came up with that? :)

I am not a English native speaker, but my Longman dictionary says it's "circle"...