Of dust and mud and poop 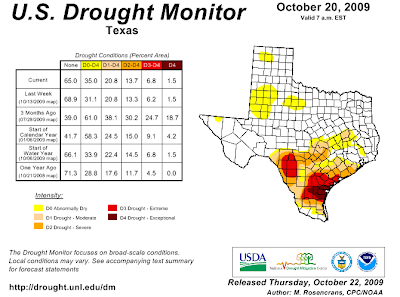 As it has (finally) started raining again this fall, it has been nice to watch the part of the map over Travis County (Austin) get progressively lighter in color, rather than stay dark brown week after week like it did this summer. It has also been nice to watch the grass get greener and to see actual wildlife around occasionally.

Since I took horseback riding back up this summer, I've been taking a lesson once or twice a month at a riding stable near my house. The only downside to all the rain we've been having is that my lessons have been frequently canceled due to the rain.

This week, the weather and my schedule finally matched up, and I was able to go out for a trail ride. My riding instructor warned me that most of the ground was fairly dry, but that there were a couple of places where it was soupy so I should be careful.

I watched my step as I went to get Bart, the old gelding used for lessons. Most of the ground in his pen was fairly squishy, so I did my best to step on the dry parts. Just as I was about to reach Bart, I stepped on what I thought was a small, dry piece of manure. Then I learned a horrible lesson.

Apparently damp manure expands in size (a lot). As soon as I put my weight down on my foot, the ground collapsed beneath my feet, and I sank about a foot and a half into manure. I was literally knee-deep in poo.

It wasn't the best way to start the weekend, I suppose, but after I got myself out of the poop, we actually had a pretty fun trail ride. And now I know better than to toss the "knee deep in poo" expression around cavalierly, lest karma decide to teach me another lesson.

Have a wonderful weekend Internets!

Love,
Jane
Posted by Jane at 10:26 AM
Email ThisBlogThis!Share to TwitterShare to FacebookShare to Pinterest
Labels: distractibility, horses, Texas