Last week, Achilles and I had our annual Halloween kids' movie night for grown-ups. Actually, on second thought my sister and brother-in-law stopped by with my niece and nephew for a little while, so it wasn't technically just grown-ups this year. Oh well. I may have succeeded in convincing Charlie (my nephew) that I always have a table full of cupcakes and candy, and kids' movies in the DVD player, and am therefore the coolest grown-up ever. We'll see.

Here are the pictures. Warning: there are lots.

The food table, before I added the 1950's housewife appetizers (mini quiches, croissant-wrapped mini sausages, etc) and apples. This year I decided to do caramel cream cheese apple dip rather than have a crock pot of melted caramel. I think it was a good choice - the cream cheese dip was delicious, and seemed to be a big hit. I *almost* got Charlie to try some by offering to let him keep one of the little skeletons if he would take one bite, but he thought the better of it at the last minute. Sadly, I did not get any pictures of the dip - I was too busy eating it. 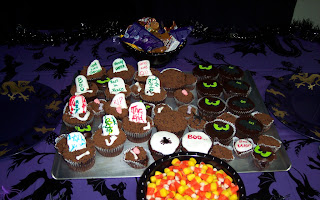 I went a little crazy with the cupcake decorations (who, me?) and made several different styles and sizes. They are all devil's food cupcakes with chocolate ganache. The "dirt" on the tombstone cupcakes is crushed up chocolate cookies. The white cupcakes have a layer of marshmallow fondant. 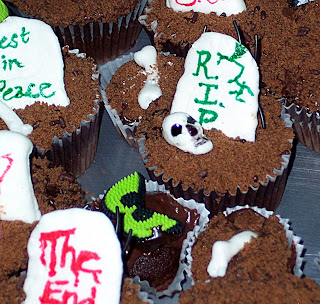 The two cupcakes on the right (the green RIP cupcake w/skull and the mini cupcake w/foot) were my favorites. I made the tombstones and the bones/body parts out of marshmallow fondant. Allegedly, marshmallow fondant is not the right tool for this. Granted, the tombstones had to be propped up with spider rings, but I am kind of unabashedly proud of the foot. It was about 3/4 of an inch from knee to tiny toes. It's hard to tell from the picture, but it sort of looked like I'd baked one of The Borrowers into a cupcake.

Jimmy Hoffa mystery solved - he is in the belly of one of my coworkers. Achilles was worried I was somehow jinxing Texas football with the OU cupcake. I refuse to take credit for that game one way or the other.

Fondant cupcakes. The fondant tasted like non-stale Marshmallow Peeps. Not really my cup of tea, but pretty decent tasting for fondant. 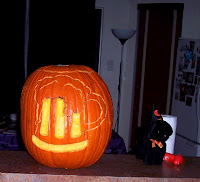 Achilles made another beer pumpkin. He put dry ice inside the pumpkin, so it looked like the beer was foaming over. It was really cool.

I dressed up as Sandra Dee and/or a future 1950's housewife. As for why Achilles took that picture from such a weird angle, I do not know. At least I think it's the picture angle that is causing my skirt to look like it is swallowing me alive. I could be wrong. 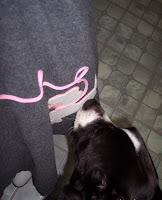 My mom made the poodle skirt for me when I was in junior high. I gave it on to one of my younger cousins when I went to college. My cousin gave it back this year when she got married. (I feel so old sometimes.) Bailey did not approve of the poodle.

Achilles was a 1970's detective. His wig was both intriguing and terrifying.

Of course, Bailey had to dress up too. 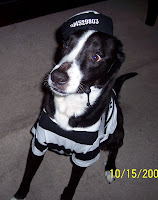 Bailey is staring distrustfully at the stuffed witch's cat from the beer pumpkin picture. I think he wants to either give it an unfair trial and burn it at the stake, or rip it apart out and scatter its stuffing all over the kitchen. It's a tough call.

P.S. Here is the Lucha Libre cupcake picture from a million years ago. Whoopsie! This is why I avoid my archives... 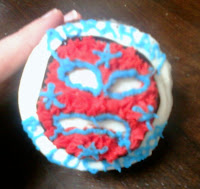 Posted by Jane at 8:53 AM
Email ThisBlogThis!Share to TwitterShare to FacebookShare to Pinterest
Labels: beer pumpkins, cupcakes, Halloween, Halloween costumes

OMG Bailey looks so cute and I love the cupcakes :)

you look super cute!!! i feel like halloween totally is passing me by this year! yikes!