I think my movie night was a success! Despite a somewhat poor scheduling decision on my part (I managed to schedule a party on the same night as the last presidential debate AND the season finale of Project Runway), most of my friends were able to stop by. Even some of the Internets were able to make it - the very awesome and funny Saving Diva brought some delicious High School Musical gummy fruit.

The cupcakes and other decorations were a hit, but A's Beer Pumpkin was the star of the night: 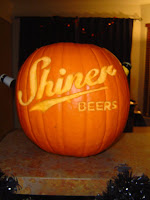 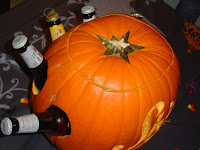 He cut beer-sized holes in the back of the pumpkin, then filled it with ice and battery-powered lights in plastic bags. A couple of people actually asked if we had candles inside the pumpkin - it looked really cool. 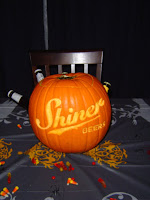 The beer actually stayed really cold. So if you're ever lost in the woods with pumpkins, a carving knife, and ice, but no cooler, you can keep your beer cold with a beer pumpkin.

oooohhh I want to try that! If I cut off my thumb, I'm blaming you.

I'm kind of amazed at the skill level involved with that.

The beer pumpkin was impressive, but the cupcakes were the highlight of the party! I ate my second one at lunch while all of my classmates jealously stared while I ate...

ah! what great photos!!! i am so impressed!

Hillary - That's why I leave the pumpkin carving to A. Better his thumbs than mine. (Just kidding. I'm just a terrible pumpkin carver.)

Ashley - Now if only I could figure out a way to get him to put his laundry in the hamper...

Tal - I learned it by watching you!

What an awesome pumpkin! I don't have the coordination or patience to accomplish something like that!

that pumpkin is by far the most amazing one i have ever ever seen. i did notice, that unless shiner changed the color of their labels, they arent all shiners inside!!! LOL. i miss shiner sooooooo much. omg just another reason to make me want to come home! ill be back from nov 1-11, let me know if youll be around, and a little bit stalkerish is okay in my book.

Thanks elizabeth - I don't either.

wanderingtex - Good eye! We got the "variety pack" which has hefeweisen, "black," light, regular, and... something else that I can't remember. :) But it was all delicious Shiner beer.

That is awesome! You should send the pics to the Shiner Brewery. I'm sure they'd love to see them.

I want a Shiner Beer Pumpkin!!! That is AWESOME.